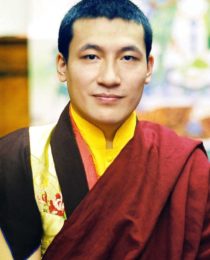 H.H. the 17th Gyalwa Karmapa, Trinley Thaye Dorje was born in Tibet in 1983. He was the first son of the 3rd Mipam Rinpoche, a great Nyingma Lama, and Dechen Wangmo, the daughter of a noble family descending from King Gesar of Ling. At the age of one and a half the boy started telling people that he was the Karmapa. In March 1994, he and his family managed to escape from Tibet to Nepal and then to India. He arrived in New Delhi, where during a welcoming ceremony H.H. Shamar Rinpoche formally recognized him as the 17th Gyalwa Karmapa. He was given the name of Trinley (meaning Buddha activity) Thaye (limitless) Dorje (unchanging).