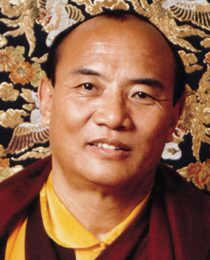 The 16th Gyalwa Karmapa, Rangjung Rigpe Dorje (1924–1981) was spiritual leader of the Karma Kagyu lineage of Tibetan Buddhism. He spearheaded the transmission of Tibetan Buddhism to the West, establishing dharma centers and monasteries in various places around the world in order to protect, preserve, and spread the Buddha’s teachings. He was considered by many to be a living Buddha.