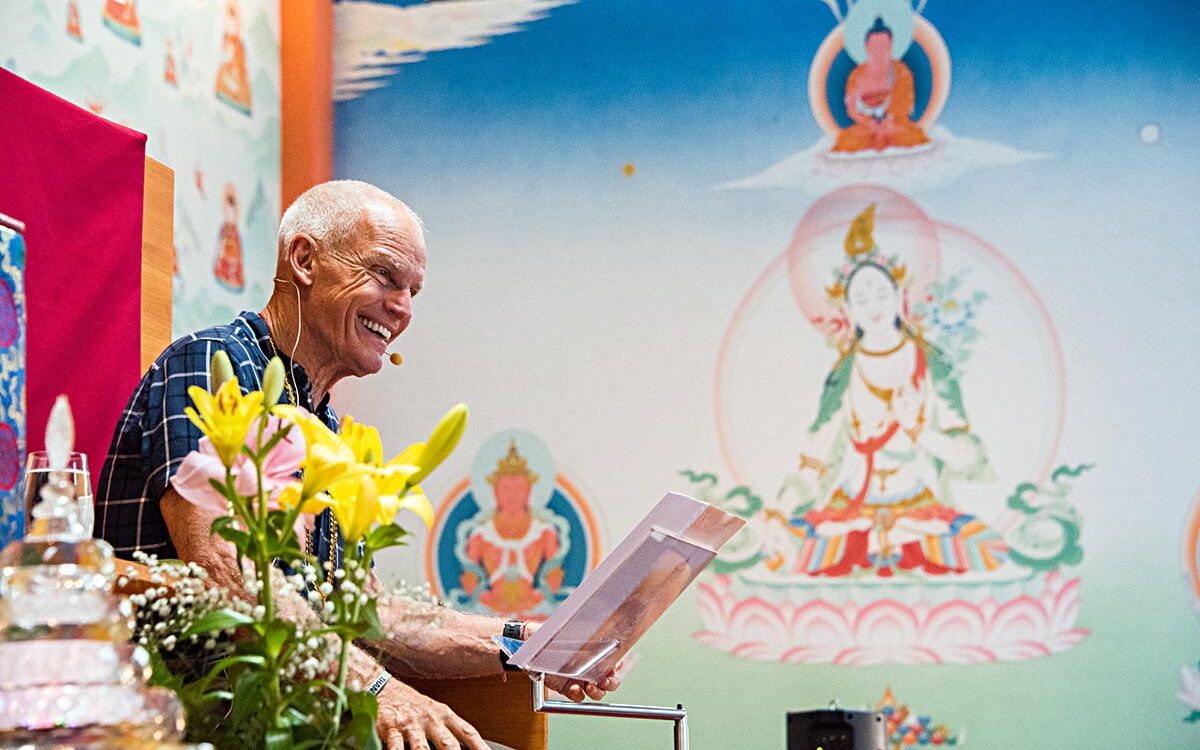 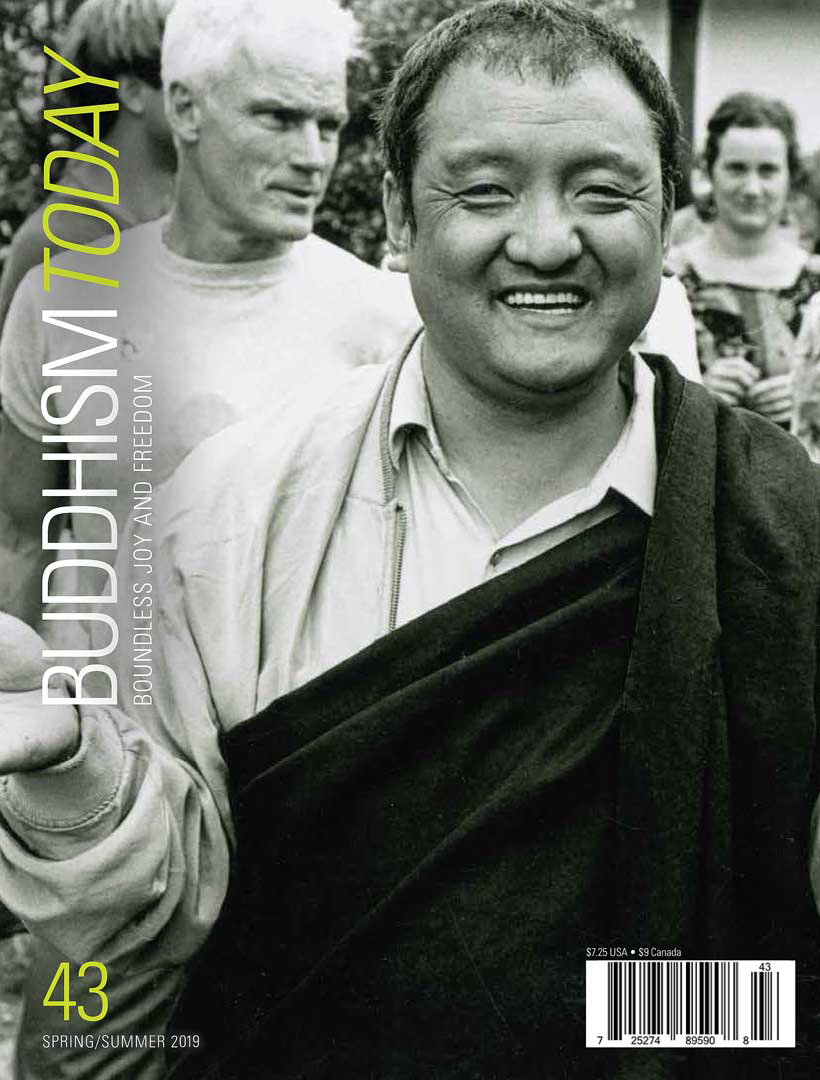 Editor’s Note: The following has been assembled from various question-and-answer sessions in Russia with Lama Ole Nydahl. It was first published in the Russian-language edition of Buddhism Today (no. 31, 2018).

How is a person’s brain related to their mind?
There is a lot of interesting information on this subject. Several years ago, one Norwegian teacher fell under the ice while skiing. After six to seven hours under the ice, her body temper- ature reached thirteen degrees Celsius (fifty-five degrees Fahrenheit). It was reportedly the coldest body temperature reached for anyone who was ever brought back to life. After resuscitation, the doctor who was taking care of her wrote in detail about her patient’s experience. The patient was dis- missed from the hospital with almost no problems. Only the mobility in her ankle had been limited because of damaged nerves. The doctor looked at her notes, decided that they were strange and threw them out. This was a big loss for science. The same year an Estonian boy fell under the ice; he was resuscitated when he warmed up, but I wasn’t able to find out any infor-mation about this.

Nevertheless, it is completely clear that the brain does not get damaged as quickly as we think. The most important thing we can learn from these examples is that mind is not created by the brain. The brain is not a radio transmitter; rather, it is a radio receiver. Therefore, the stream of awareness moves from one life to the next, accumulating new impressions that determine its next existence. This process has been going on since beginningless time. The emotional character of these impressions is very important. If we do a lot of pleasant and joyful things for others, this fills our mind with impressions that lead to happiness and pleasant situations later. And if we do a lot of harmful, negative things for others, this manifests later as suffering and pain. Right now, we are creating conditions that determine what we will experience after death and in the next life. What we put into our mind will come back to us.

What happens to mind when a person is affected by diseases such as amnesia and dementia?
Scientists are now discovering that the brain is not a radio transmitter but a receiver. It does not produce mind; rather, it transforms and transmits it. And even if this transmitter breaks as a result of our developing senility, the radio waves still remain. Even if the transmitter captures only one channel and a lot of noise, all the programs are still present in the airwaves. And if the transmitter falls and breaks, the stream of consciousness continues to exist, later joining with an embryo in the uterus of a new mother. This is good to remem- ber when one visits an old relative who is affected by dementia or who has undergone brain surgery. They cannot express their potential fully, but have not lost anything. Therefore, treat such people with respect—in this state they know what is happening, even though they cannot express anything.

Could you please comment on the statement that a thought is material, and that by creating an image in our brain we can make it real.
If we make the decision to be a good person, then after awhile we will really become one.

I recently read an article that stated that the parts of taxi drivers’ brains that are responsible for navigation are constantly growing, despite the fact that they are grown adults. Our thoughts influence the world, and the world—in turn—influ- ences our thoughts.

Why do mental illnesses appear?
Buddhism has a certain classification of mental illnesses. The first kind is schizophrenia, when we allow ourselves to hang out uselessly without creating joy, without doing anything powerful or meaningful, and energies that seek to obtain a body may come to inhabit us. We can protect ourselves from this through good deeds and a sense of humor. The second kind is when mind, filled with negative impressions, looks at itself and sees something it does not like. As a result fear and paranoia appear. One of the causes of mental illness could be the use of drugs or alcohol that we used in a past life. Another reason may be the drugs or alcohol we’ve taken in this life, damaging our brain.

How do teachers explain the nature of autism? What is the reason for a growing number of cases of autism in the world?
As far as I know, autism appears when the right hemisphere of the brain barely functions, while the left is very well- developed. The right hemisphere is responsible for feelings and emotions, while the left is responsible for facts. There are also people called savants. They are very introverted, but often have outstanding abilities. For example, one such American remembers the name of every village in the United States and all the distances between them. It seems that life consists of signals from the right and the left sides of the brain, which—when they intersect—disturb each other, but eventually make us human. The left hemisphere sends a lot of information, whereas the right one wants to dominate it and sends emotional coloring. In response the left again sends information—and, thus, they interact. People with a weak right hemisphere may remember huge volumes of information. And those whose right hemisphere is dominant become too personal and emotional.

For many years I smoked marijuana actively and daily. Now I haven’t smoked for over a year, but my memory still doesn’t function well. Buddhist names and terminology stay in my memory for fifteen minutes, maximum.
There are certain areas in the frontal lobes of our brains that don’t give any signals for half a year after you stop smoking marijuana. I spent nine years of my life in this situation. And most likely I would have been more intelligent today if I had drunk beer instead of smoking. Weed damages the brain. It is especially bad because people get used to getting around difficulties, and become a bit like an eel—slippery.

I have clinical depression and have to take antidepressants. May I continue to do prostrations?
Yes. If you make your body move instead of lying around on the couch like a cooked vegetable, you will come out of depression faster. Movement helps mind get rid of subcon- scious impressions. Generally, all sicknesses, physical and mental, are enemies, and they need to be destroyed by all means. Don’t think that if you suffer longer your purification will be deeper. There is nothing noble in it. It is like a snakebite— what caused the suffering already happened and now one needs to make every effort to fight off the consequences. Fight. Battle against the illness with all possible means. Get rid of it. Give it a kick in the behind.

Should we advise a person to see a psychologist if they have personal problems?
If people need a psychologist, then yes, of course. If someone needs medication, then let them take it, because they need to suffer as little as possible. Buddhism is for healthy people.

The question is not about sick people but about those who simply want to make their lives better and solve certain problems.
If it helps them, then please. However, they may simply go to a party and find a generous woman ready to help. Some people really need to be able to speak about their problems. But Buddhism deals with other things. Buddhists say: “This problem didn’t exist before and won’t exist later. Then, why worry about it right now?”

Lately, there are Buddhists who have started attending various psychological courses, and some consult psy- chotherapists, even those who have already finished the Ngondro. What do you think about this? Why does this happen?
I spoke about this with Michael Fuchs, my student who gives various courses, and it turns out that they are intended specifically for managers. I advise people not to play with this, because in our centers people learn to combine dualistic conceptions—good/bad, exists/doesn’t exist—with a non- dualistic view of both/and. People learn to work with the absolute and the relative at the same time, and there is no need to give them another intermediate level, which has a completely different goal. If you receive a dualistic system, which you don’t need for your work, it will only confuse you. There is no need to complicate your life.

Concerning Buddhists who see psychotherapists, I can only wish them luck. I’ve met many psychologists who know how to help people, and I still think that psychologists come to Buddhism more often than Buddhists go to psychology.

Usually, Buddhists and psychologists work together.

How can we develop respect for people?
Try to understand that everyone has buddha nature. Every- thing that you see in people that is most beautiful is closest to their true nature. Also, try to understand that their enlight- ened nature shines continuously, whereas their shortcomings are like clouds that pass by. Think that every person holds a bag of gold in one hand and a bag of sand in the other. Ask yourself what you would like them to share with you: gold— good meaningful actions—or sand? Rejoice when others do something good.

Half a year ago scientists discovered a phenomenon they called “mirror neurons.” It turns out that neurons transport impressions received in the process of sensory perception to those parts of the brain where they may be used. In this way, for instance, one can learn to play soccer by merely observing how others do it. If you like something nice that others are doing, you absorb it too. It is good for you and for them—everything becomes richer.

When eight-year-olds are interested in Buddhism, how can we present the teachings to them?
We should not impose anything. The only possibility that a child will become a convinced Buddhist is by being proud of their parents. Be a good example. Show your children that you can answer questions that other parents cannot answer; show that you have a meaningful, happy life. Children are much smarter than you think, and much more sensitive. Also, allow them to be with you when you are meditating, because children like the brain waves we produce during meditation.

How can our meditation bring happiness to beings that don’t meditate?
We become a good example, behave better and maybe even say something intelligent. We all influence each other. Being in harmony with ourselves, we bring benefit even when walking by a neurotic person on the street. People feel the calm of our mind. When we meditate, cats, dogs and children come to us, because they subconsciously receive the harmo- nious alpha and theta waves, which are produced by our happy brains.

Translated from the Russian by Masha Chlenova. 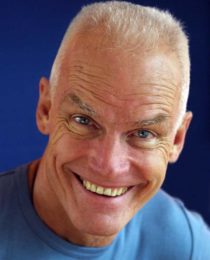 Lama Ole Nydahl is one of the few Westerners fully qualified as a lama and meditation teacher in the Karma Kagyu Buddhist tradition. In 1972, after completing three years of intensive meditation training, Lama Ole began teaching Buddhism in Europe at the request of H.H. the 16th Gyalwa Karmapa Rangjung Rigpe Dorje, the spiritual head of the Karma Kagyu school of Tibetan Buddhism. He has since transmitted the blessing of the lineage in a different city nearly every day, traveling and teaching worldwide as an authorized lama. His depth of knowledge and dynamic teachings inspire thousands of people at his lectures and retreats in North and South America, the UK, Europe, Australia, New Zealand, Russia, and Asia.